As a local, state, or federal police or law enforcement officer [LEO], unless you’re tied to your desk day in, day out, you know the job’s inherently dangerous.

And how, no matter how well-trained you are, sometimes situations can turn ugly, fast. What with gun crime and especially knife attacks on the rise, you don’t need to be reminded of the value of being kitted out in protective vests or similar body armor whilst on sworn duty.

Though bulletproof gear in its strictest sense is still firmly in the realm of science fiction, bullet-resistant tactical vests and the like are proven lifesavers for police in particular.

During the last 3 decades in the United States alone, the lives of several thousand law enforcement officers (not to mention countless military personnel) have been spared thanks to wearing bulletproof tactical vests and plate carriers.

Sadly, not all serving police officers are fortunate enough to be supplied vests by their precinct or receive donated protective gear from a charitable organization.

Even those police officers for whom it’s mandatory wear may be issued hand-me-down tactical vests and such which have been poorly maintained, compromising the level of protection.

That, or peace officers find new department regulation vests uncomfortable, ill-fitting, or too hot to wear.

Yet other police, in the interests of self-preservation, have little choice but to dip into their own pockets to pay for personal body armor.

The Police Vest from Yesteryear to Today

Body armor for police and law enforcement officers has come a long way since Smith & Wesson marketed the ‘Barrier Vest’ back in the early 70s.

Now, there’s a head-spinning amount and variety of modern day body armor up for grabs – soft armor panels and hard armor plates; ballistic, stab/spike, and multi-threat resistant gear; and concealable versus overt vests, to name just a few sorts.

Quite apart from knowing what to look for when choosing police body armor, remember also that what may work for one particular role in police/law enforcement may be far from ideal for another.

So at Bulletproof Zone, to save you the time and trouble, we’ve curated a line-up of some of our top picks of body armor engineered especially for police and other law enforcement officers.

Concealable bullet/stab-proof vests are meant to be worn beneath casual wear or a police uniform and go unnoticed by both regular citizens and criminals.

As such, these vests are most suitable to wear for undercover detectives, plain clothes investigators, FBI agents, and even front-line police officers who need to be approachable to the public yet protected throughout extended shifts. • SAPI pockets on the front and back of the vest can each accommodate a 10”x12” NIJ Level III or Level IV hard armor plate for additional rifle and sub-machine gun round protection.

• Quickly adjustable waist straps and side panels for extra protection and an optimum fit.

• Available in either black or white, a choice of 7 sizes (small to 4XL), and a trio of lengths (short, normal, and long).

Bullet/stab-proof tactical vests are designed to be worn over plain clothes or a police uniform, and to stand out as a visible deterrent.

At the same time, not surprisingly, tactical vests are most suited to be worn by tactical ops crews given the added benefits of being modular for carrying service gear, and quicker to remove should the vested police officers' be injured on duty. • Hands down, the best value concealable body armor for police/law enforcement officers there is.

• NIJ-certified wrap-around ballistic panels consist of a unique blend of aramid and polyethylene fibers - classed among Level IIIA+ since the vests are also capable of protecting against most stab/slash attacks from edged/spiked weapons.

• Small signature, gender-neutral carrier complete with breathable lining; carrier itself is made of rugged 600 Denier polyester fabric and features a hook-and-loop area for placement of an identity badge.

• Now with Action Flex Technology offering extra cushioning for an even more flexible and comfortable wear.

• Can be accessorized with...

• Turns the covert VP3 vest into a tactical vest complete with multiple rows of MOLLE straps for holding police service tools/supplies/gear such as a baton, pepper spray, or stun grenades. 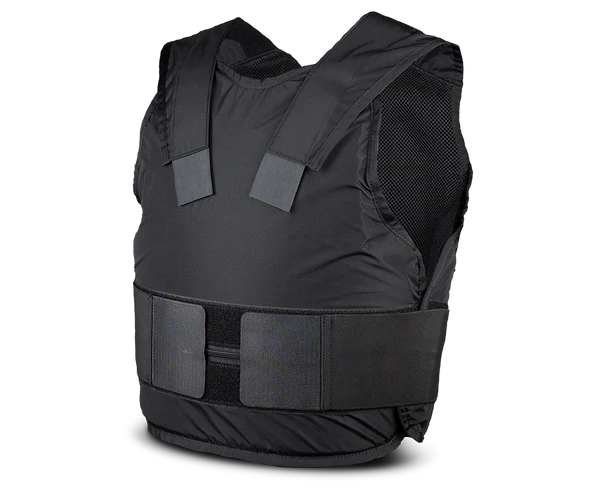 • Minimalistic design of carrier with a custom spacer mesh that circulates air, keeping the body cool.

• The vest comes in black or white. 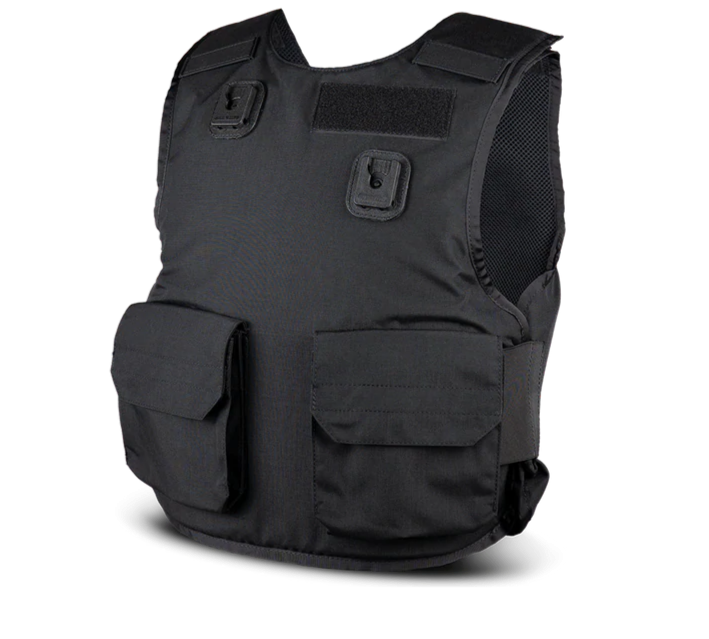 • These tactical vests can be had in plain black, or otherwise in yellow, navy blue or black with hi-viz reflective tape.

Especially since canine officers are often sent in ahead during the apprehension of suspects, when detecting narcotics, sniffing out explosive devices, tracking fugitives, or engaging in search and rescue. • The K-9 body armor of choice for German Shepherd Aston of the Evanston Police Department and endorsed by the Wisconsin Vest-A-Dog program.

• The vests are produced by one of the top ten body armor manufacturers in the U.S.

• Affords belly and chest coverage with bullet resistance to NIJ Levels IIA, II, or IIIA and stab/spike protection at Level 2 or 3.

• Covered zipper closures to prevent snagging of the dog's fur and skin. 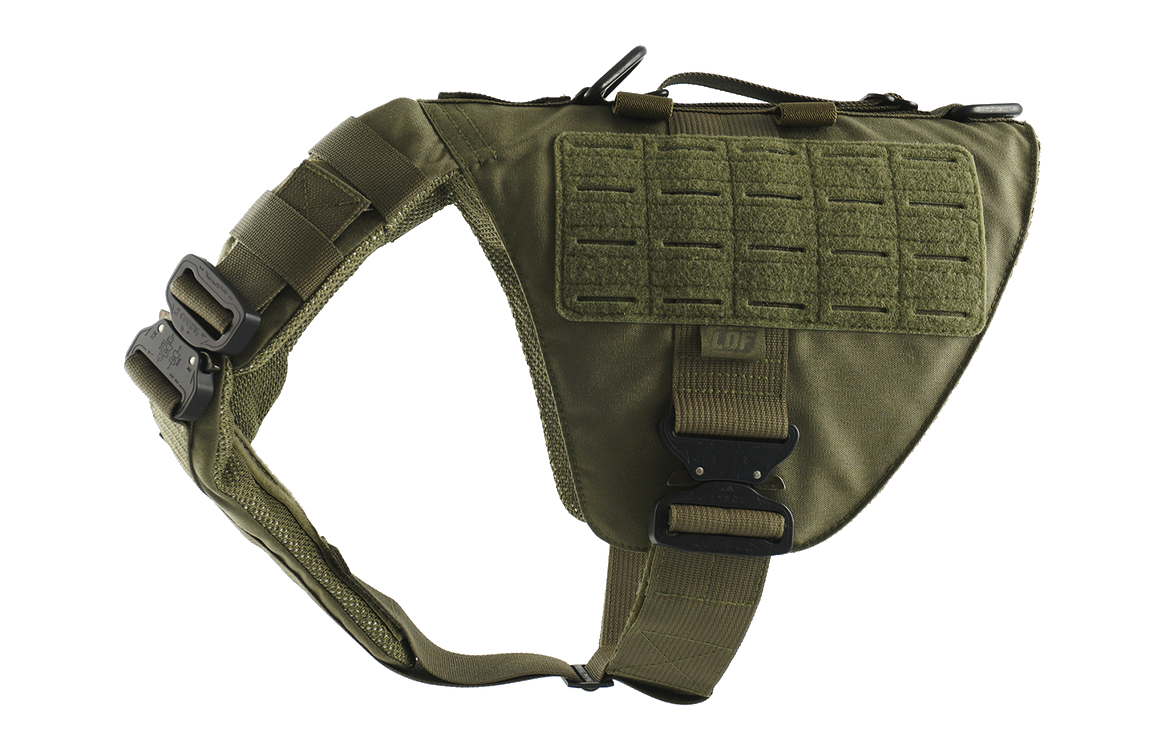 • Interchangeable soft armor panels rated at NIJ Level II or IIIA for ballistic protection, and Levels 2 or 3 for stab/spike protection.

• Long-lasting, ergonomically cast, and lightweight (up to 4.4lbs) carrier vests. • Else, switch out the supplied soft armor with the manufacturer’s own Level III AR500 Omega or Level III+ AR550 hard armor plates.

• Sold in a handful of colors (Black, White, Tan, Multicam, and OD Green). • Constructed of rip-stop and water-repellant 500 Denier Cordura with 3-dimensional spacer padding on the front, rear and shoulders for better ventilation and lessened pressure points.

• Laser-cut load-bearing MOLLE platform on the front, back, and removable cummerbund for carrying police gear.

Tactical headgear functions to safeguard one of the most vulnerable parts of the body from thrown projectiles and impact weapons as well as bullet rounds.

In fact, where police/law enforcement officers are concerned, the head is the area most targeted by felons.

Although not standard issue wear for regular police officers, they’re especially worthwhile during active shooter incidents or when at risk of a violent assault. 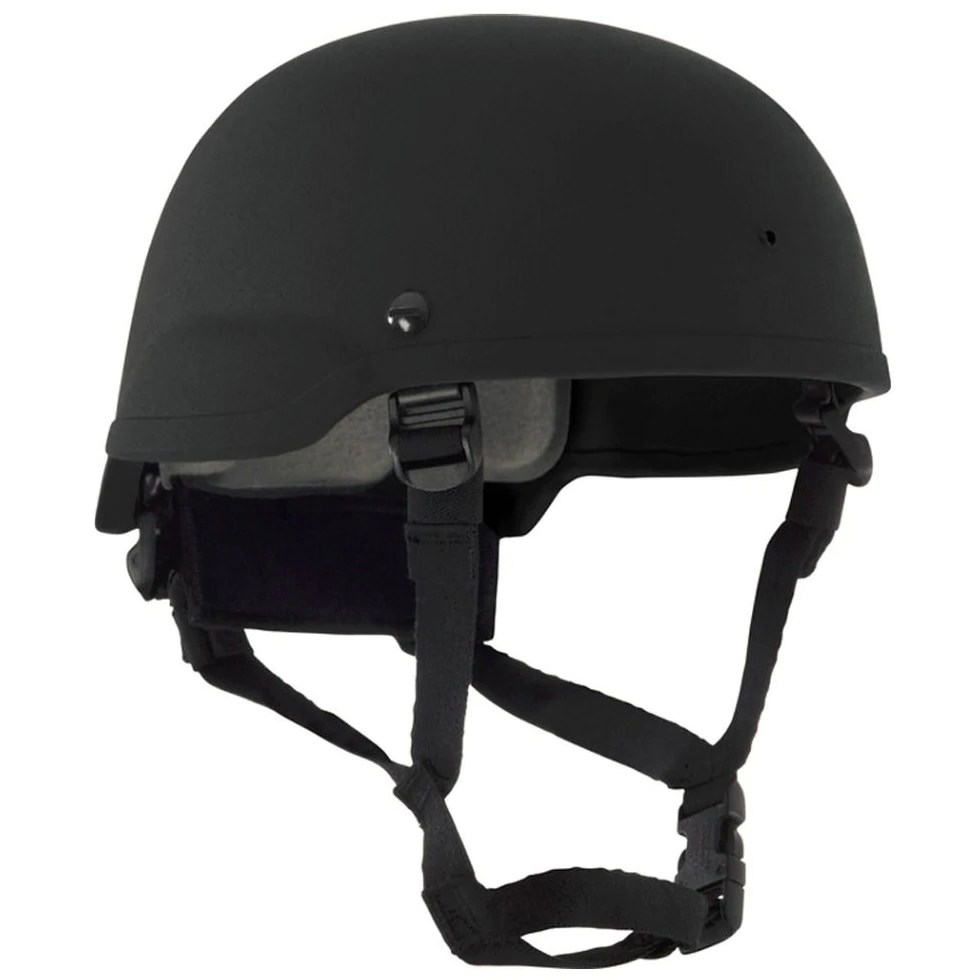 • In service with the Galveston Police Department, and helped an Orlando SWAT operative survive an otherwise fatal head shot.

• Made of monolithic aramid material, and provides bullet resistance to at least NIJ Level IIIA.

• Scalable with a suite of modular components including front mount, interlocking rails.

• Set of 7 liner pads for added impact protection, and which can be moved for optimal weight distribution and a more comfortable fit. 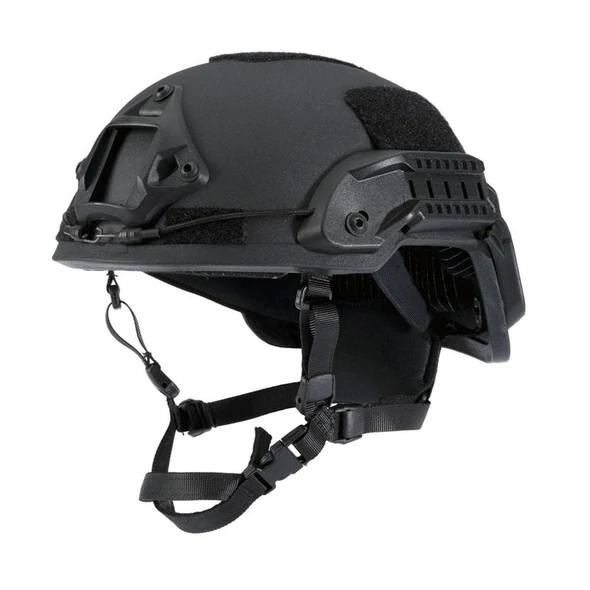 • Rotary dial-adjustable BOA Fit System and 10 memory foam pad inner lining not only allows for a custom fit and makes the helmet exceedingly comfortable, but also greatly reduces the impact from a bullet or other projectile.

• Highlight modularity with side and front shroud ARC rails supporting mounting of all manner of add-ons from an oxygen/gas mask and Picatinny adapter to NVGs and GoPro action camera.

• Weighs a mere 2.5lbs for the clean helmet itself; sized large or extra large; and a selection of 6 colors (Black, OD Green, Multicam, Multicam Black, Khaki/Sand, and Coyote Brown).

Tactical shields provide not only an additional safety barrier from potentially armed individuals, but also cover to minimize exposure of police officers.

Most often, they’re deployed for tactical entry scenarios such as executing search/arrest warrants, hostage rescue, and drug den raids. But they're also used by anti-riot squads and even police patrol officers first on the scene. 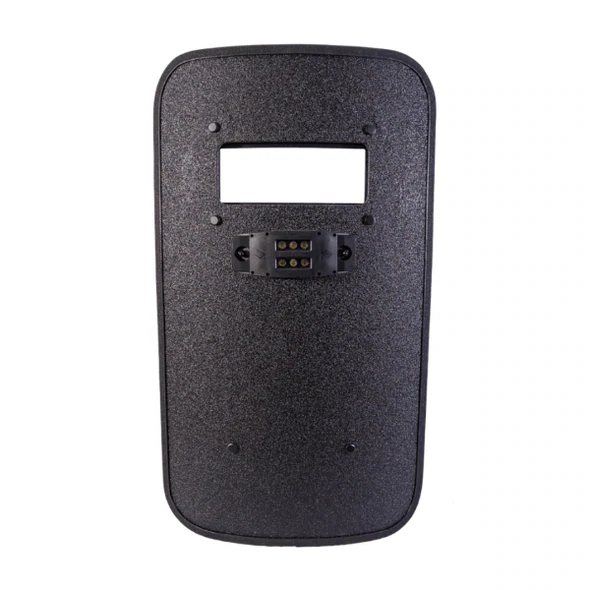 • Though adding 2lbs, can be upgraded to include in-built high-power LED lighting on the strike face. 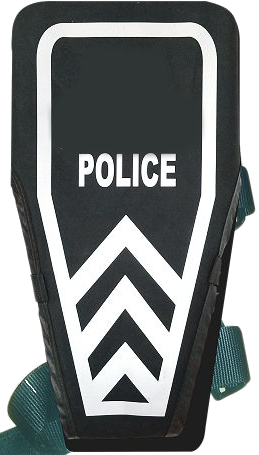 • Used as a de-escalation tool by Boston Police Department, Shenandoah County Sheriff’s Office, Massachusetts Department of Correction, Federal Bureau of Investigation, as well as officers of the U.S. Marshal Service and Customs and Border Protection.

• Every purchase comes with complimentary electronic training and a lifetime warranty.

Must-have wear for police officers, trauma pads are inserted behind the armor panels of tactical vests and plate carriers.

Although trauma pads don’t offer any defense against bullets, they do enhance protection by further decreasing the felt shock and impact from any kind of blunt force trauma.

Because of this, in real-world conflict situations, they buy the wearer more time, letting them take cover, return fire, or flee the scene. 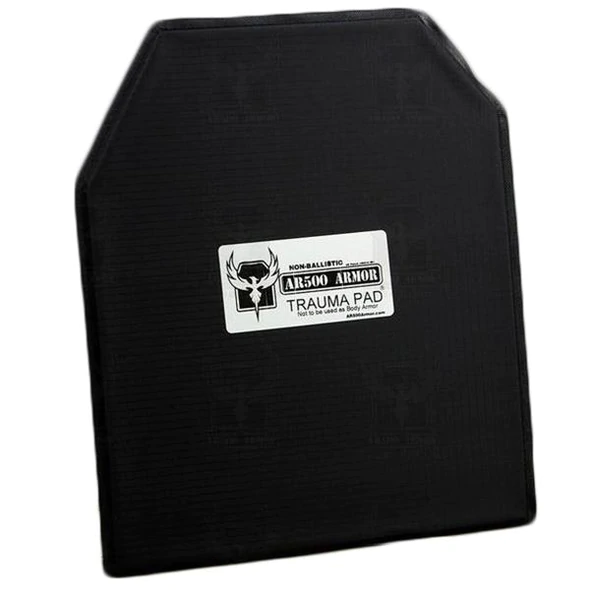 • Ultra-slim (0.25”) profile and tips the scales at approximately 6 ounces.

As police/law enforcement officers, you just never know the moment you could be confronted by a criminal with a concealed kitchen knife during a routine traffic stop or a crazed psychopath wielding a high-powered assault rifle in a public space.

And body armor like tactical vests, plate carriers, and other protective gear often means being able to live to see another day.

What's more, to help ease the financial burden in these unprecedented times, we let you spread the cost of body armor and accessories with a number of payment plans.

In addition, every order over $100 from Bulletproof Zone qualifies for free shipping anywhere in the continental United States and is backed by our price match guarantee.

Whether you're a former or serving police official, we'd love to hear from you! Exactly what kind of vest or other body armor did/do you wear and how did/do you find it? Let us know in the comments section below!